In preparation for the performance at the National Gallery in Singapore I created a costume, a dress-composition in a double sense: composed of music and textile. I was present in the museum space for 10 consecutive days, during which I wore and turned the dress-compostion into songs for six hours a day.

As part of my research I had looked into female narratives within Singapores history, which led me to exploring the stories of the Samsui women, sisterhoods of Chinese immigrants who came to Singapore between the 1920s and 1940s. Boro, which refers to a repairing and reweaving practice developed by the working class people in Japan during the Edo period came to my mind. As in many other cultures too, Boro clothing was stitched together from several pieces of textile, giving new use to older, tattered garments.

I asked women who are present in my life if they would contribute a piece of textile that is meaningful to them and then stitched them together into one dress. Some gave of their own, others sent or brought something connected to a story of another woman they wanted to share – like their mother, a sister, or a friend. Each piece of fabric came like a voice, speaking its own story, and needed to be arranged almost musically, like finding the right place for a note in a composition. My own physical experience of mending and composing these stories together into one was the beginning of the ritualised dress-performance.

I believe that everything that has existed and all that is coming into existance is intricately connected.  None of our individual stories stand alone, consciously and unconsciously they are woven together in a grand and non-linear narrative. The dress-performance contains the power of creation by honouring our collective memory and trust within each other. When those women gave away something meaningful none of them, including myself, knew what exactly would be made out of it. It was a continuous process of receiving, arranging and hand stitching the fabrics together while the dress-composition grew into what it has become.

I continue the ritual of mending stories together and am currently working on the 3rd dress-composition.

Excerpt of the stories and fabrics

“When you asked me to give you a piece of fabric I thought about what kind of experience I wanted to share with you, and what kind of experiences do we give to other people. The first thing that came to my mind was that I did not want to share any of my sorrows, but wanted to give you something that was not heavy and that felt like bright laughter. I went through my memories and chose a neck scarf which I was wearing on the day of my wedding, when I was 19 years old. On that day I remember thinking of the world and seeing it as fun, light and sparkles. Like bubble gum and wildness and fun-fair rides. That day I loved and laughed so much. Even though I seperated from my husband we remainded incredibly close friends. Our relationship was the first time that I consciously chose someone to be part of my family without blood ties. I try to keep in me some of the brightness and warmth and bubbly feeling I had that day… it gets difficult sometimes to stay light because life can add a lot of weight if one is not careful. But this piece of fabric has always been a good reminder for me to shed the weight and look for happiness, both for myself and for those I love.”
— Julietta Aranda

“I bought this pink blouse in Mexico in 1978 and had looked forward to wearing it ever since. But somehow the right occasion never turned up so I am handing it over to become part of your dress.”
— Sophie Calle

“My mother got it from her mother. And gave it to me when I moved to my own space for the first time in order to put it under the cup of coffee which I like so much. Morning, evening, night, all day long. There is an Arabic epigram which says that if you prepare your coffee by yourself, with the first coffee of the day you are able to decide how your day will unfold.”
— Ofira Henig

“There was a time I spent my days sewing a lot, creating small puppets of animals, drawings. Everytime I finished a work there were many small pieces of different fabric left on my working table. I stared at them, I wanted to throw them away. But they were also part of the creation. So I started to tie them together creating these colored stones you find inside the letter.  I didn’t know what to do with them, but I did it each time I sewed. When you asked me to send something for your work I immediately thought of these small stones made out by what was left-over. These little stones are in some way the symbol of the force of transformation, of invention from the reality, from what we have in our hands, and this is what I wish you... and then some black feathers, they come from a show, because we are like beautiful, elegant birds.”
— Silvia Costa

“After 36 hours of labour, my child was born and wrapped in this sleeping suit.”
— Laurie Young

“A piece from my grandmother: a white handkerchief embroidered in blue with the letter M, the same as my name. Her name was Margret. It was given to me after she died. It is part of the the time-honored tradition “something old, something new, something borrowed, something blue” which was once thought to not only give the bride good luck on her wedding day, but also help to guarantee fertility and prosperity. Well, I never did any of those things – get married or have children. I like the idea that it can live on in an art work.”
— Maureen Jeram

“This scarf is connected to both of my grandmothers: Both were born in small villages in the north of Iran (Province of Gilan). My grandmother on my mothers side in 1917 was slaving away knee deep in the waters of rice fields while carrying her new borns on her back. She had her first child at 18 and died when she was 35, bleeding to death with the birth of her 8th or 10th child. My grandmother on my fathers side was born in 1910, married with 16 and was a widow with 3 children at age 20. They told me she was beautiful but she did not remarry for love or wealth. It was her only chance to survive. She lived at a time and a place, where tradition, religion and especially men were ruling over womens lifes.”
— Maria Hessan

“My very favourite sweatshirt as a kid was orange with a big blue whale on the front spouting water. I remember being the happiest child on earth wearing that sweater. It was already worn out and ratty by the time my older cousin gave it to me, but it was his favorite thing, so I loved it with all my heart. He was my hero at the time, and I was so proud that he had decided to give it to me instead of his younger sister. I got it when I was very young, probably around two years old. I was growing like crazy at the time, but I insisted on wearing it until I was six, even though I had grown out of it by then. I remember the joy I felt when wearing this sweatshirt. I gave you a sleeve, with which I wiped my tears when I was sad, into which I laughed when I was happy or sneezed into when I was sick.”
— Madhavi Gerbitz

“I bought this fabric in Kyoto in 1971 at Shin Yo Do, a Zen monestary, long before you came into beeing on this planet.”
— Christine La Monte

“My mother has always loved monkeys. My mom was different to other moms in Mexico. I was kind of embarrassed. Also, we ate with chop sticks, which also embarrassed me. Later in life as a grown up I realized just how crazy it was for me to feel so bad about being different. And now I love the monkeys to. A memory of where we come from. A country full of coconuts , monkeys, banana fields etc…. Three years ago in the midst of a sad and lonely time as a gift I asked for a velvet textile representing all kinds of monkeys. I upholstered a small chair with it and I look at it and see my mom, my grandmother, myself.”
— Victoria Clay

“I needed this blanket to fall asleep to when I was a child – I carried home around in it. And yes: one of it’s corners was always in my mouth, to chew on.”
— Julia Draganović

“If I had to decide for one piece of clothing to live in forever, this black midi dress with double print would be it. I found it in a vintage store in New York City in 2009. It has witnessed my saddest and happiest moments, attended celebrations with friends, a funeral, summer nights, travels to Italy, France and Japan. I can put it on without needing someone to button it up for me which gives me a feeling of independence and lightness. I cut a little piece of fabric from the lower seam and will continue to wear it as it is now.”
— Friederike Schilbach

“My eldest sister died in 2006. I remember the last time I was at her studio, going through her belongings and a friend of hers said: ‘Take these beautiful little ‘left overs’ with you.’ She put them in a plastic bag holding also a big piece of black lining with Eiske’s name ‘woven’ in it. It is the lining she used for her designed clothes. My sister had always worked in fashion, but she only started her own line at 54 years old. Always looking for her own path she had finally found it.”
— Ig Henneman 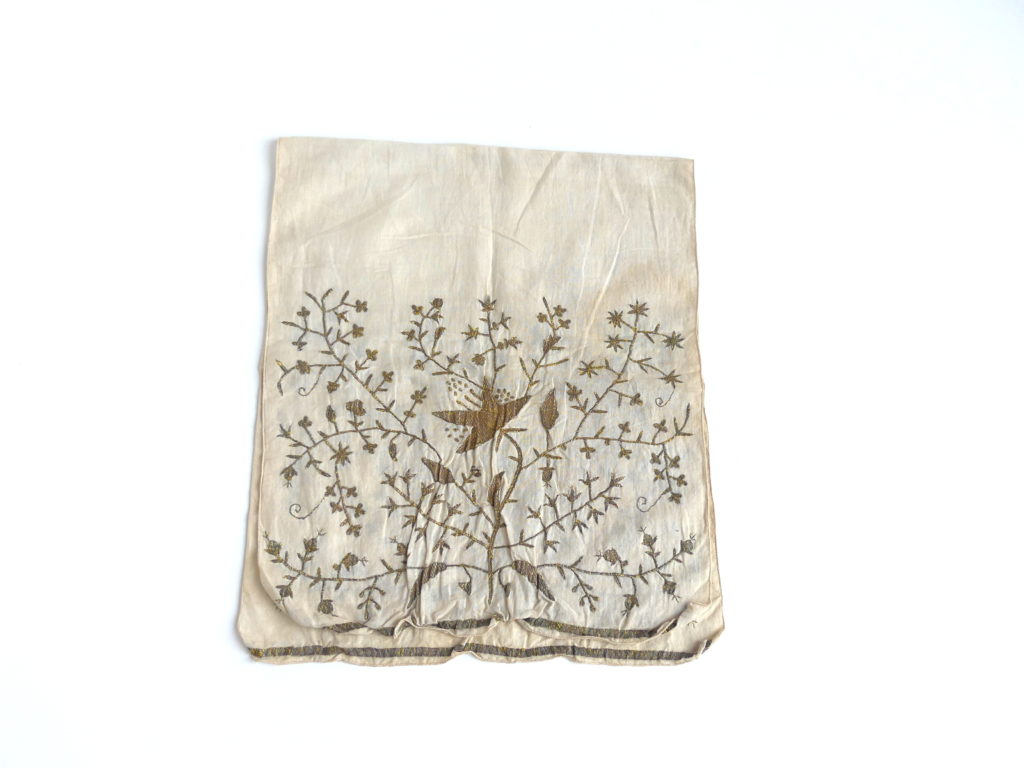 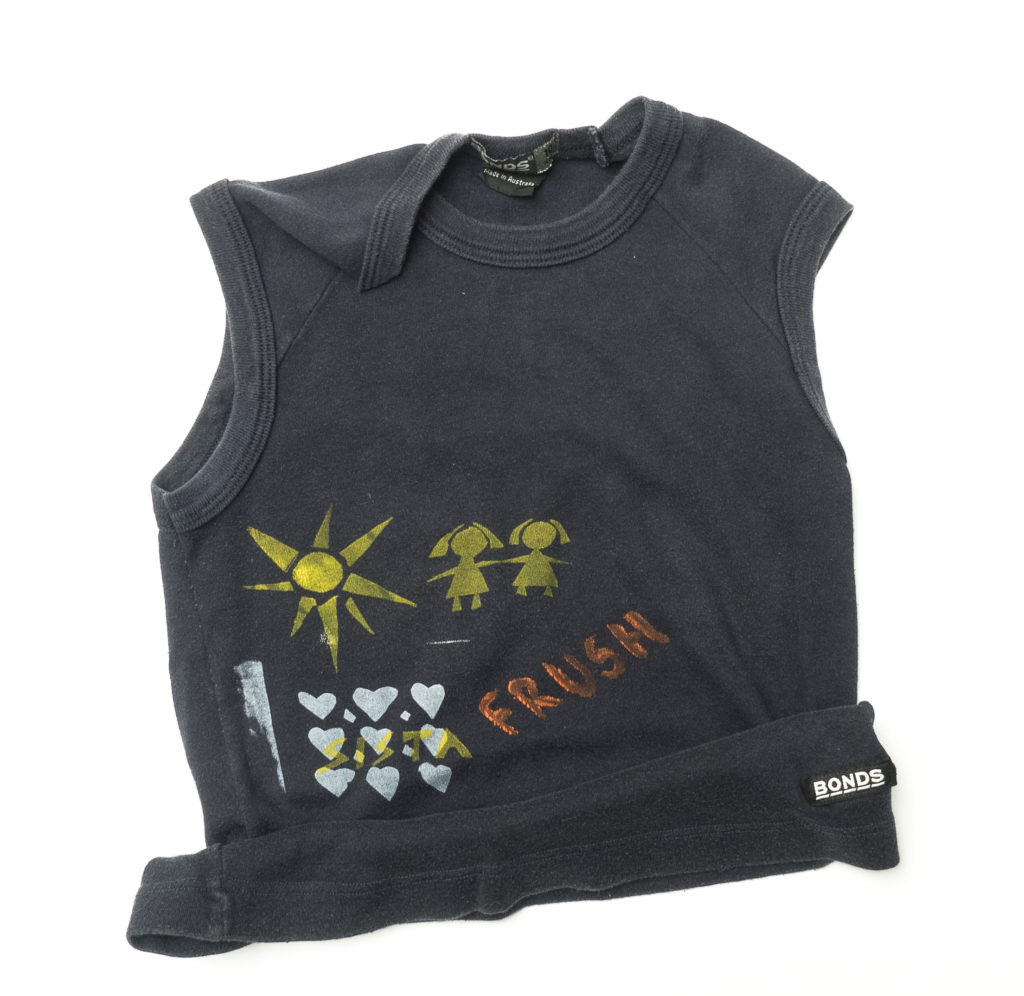 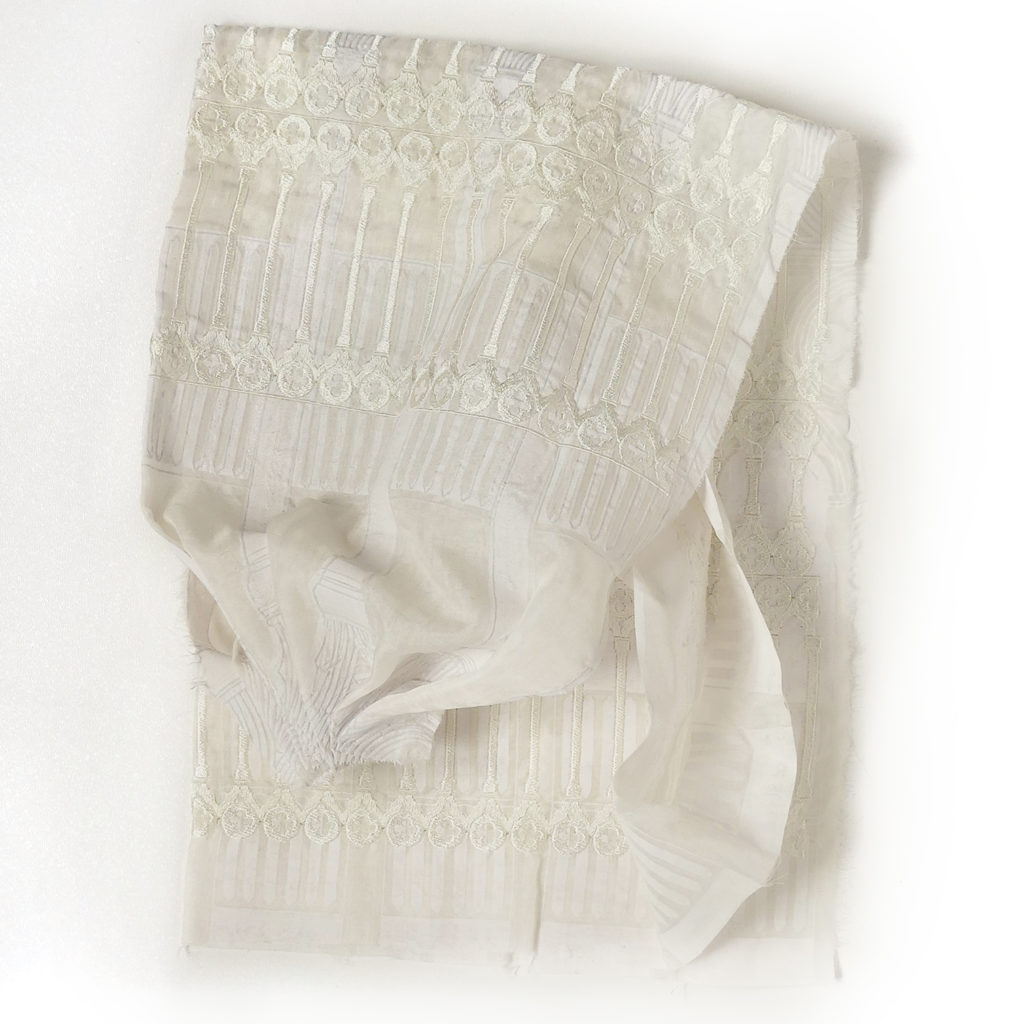 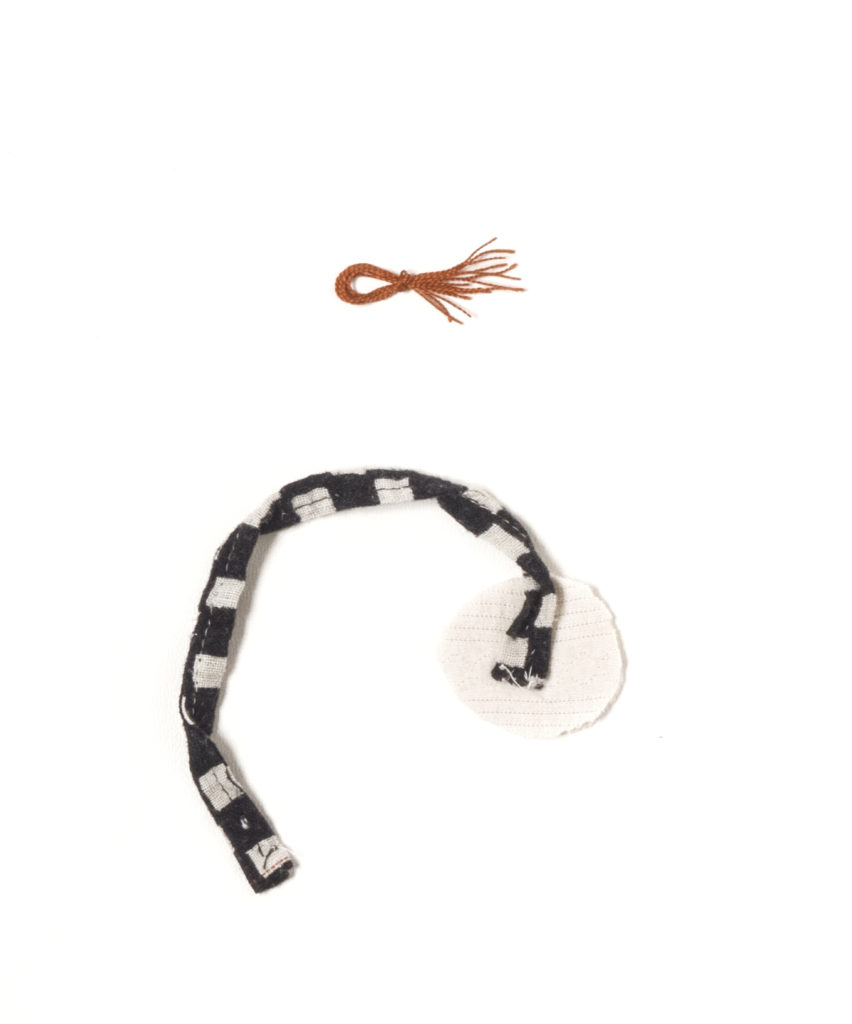